Business Casual is the new album from besuited time travelling lotharios, Chromeo. With their temporal dial still firmly stuck to the 70s and 80s, they reappear for the third time in the present day with ten tracks stolen from the eras that funk forged and fashion forgot. 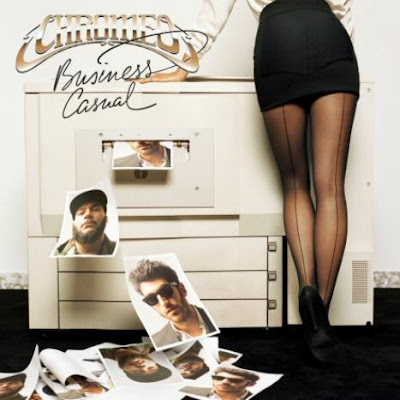 In 2007 Chromeo released ‘Fancy Footwork’, riding the blog-house/nu-rave/indie-dance crossover waves onto dance floors and radio playlists alike. Since then the genres have evolved, mutated or just plain expired. The retro sound has exploded with La Roux’s synth-led pop topping the charts and everybody from Robyn to Editors getting in on the act. In the face of such saturation can Chromeo keep it fresh?

Yes. If there’s one word to describe the Canadians then it’s ‘fresh’. Of course, this description is as tongue in cheek as their lyrics. Nothing so heavily influenced by bygone eras can really be new and ‘Business Casual’ is more ‘Business As Usual’ but we wouldn’t have it any other way. Electro-funk bass-lines that’ll have you strutting from one epic guitar solo to the next, disco string stabs and P-Thugg’s vocoder harmonising with Dave 1’s silky-smooth sonic seduction. Fans will already have a taste of this aural satisfaction from the pre-released ‘Night By Night’ and ‘Don’t Turn The Lights On’. There are, however, a few surprises. An anonymous, stereotypically English girl opens the album with ‘You’re a Hot Mess / You act like you’ve got nothing to lose / But i’ve already lost my temper’. ‘You Make It Rough’ arpeggiates its way through the seven minute mark with a sweet vocal refrain, making it their longest track by some margin. Solange Knowles pops up for her second unexpected appearance in two weeks, this time on ‘When The Night Falls’. And finally, ‘J’ai ClaquÇ La Porte’ is sung, as the title suggests, entirely in french. It’s relatively little variation in the scheme of things and, with the exception of Knowles’ sensational cameo, does little to distract us from enjoying what Chromeo do best.

In a climate so full of synth bands, throwbacks and chart saturation, Chromeo still rise above. Strangely, seeming to pack more substance despite their intentional irony and knowing winks. Maybe it’s because they’ve been doing it longer, maybe it’s because they have a genuine love for the decade’s sounds or maybe they’re just better. Whatever the reason ‘Business Casual’ is a collection of jams pumped so full of good times, humour and sex that you’ll have to try hard not to get pregnant just by listening to it.

Related Posts:
I Could Be Wrong, Night By Night and Don’t Turn The Lights On